Time was of the essence for Stellar Management, a New York-based commercial developer, when it reached out to Alpine Painting & Sandblasting Contractors in Paterson, N.J., to provide painting for a wide range of substrates covering more than 500,000 square feet of new concrete tilt-out construction. More than halfway through the project already, Stellar needed a painting contractor with a proven history of working on large-scale, highly specialized projects.

The facility in question was a fulfillment center for Blue Apron, a meal kit delivery company. The New Jersey refrigeration and distribution facility would serve as a signature location when it opened in late 2017. But late in the project the construction manager was still bringing on subcontractors. The result was that when Alpine Painting’s crews first moved onsite they found they were working alongside hundreds of other craftspeople working furiously to meet the same rapidly-approaching deadlines.

Stellar had specific requirements for safety qualifications and insurance limits, and Alpine soon proved up to their expectations. But in working with this new client for the first time on a tight timeline project, Alpine was reluctant to dive in and bid the full project at once.

“I wanted to make sure we were able to handle their requirements, and that they were happy with us and the contract language, before we would ramp up to the full scope,” shares Dave Scaturro, principal. “Fortunately, it was a good fit.”

Projects were varied—from coating ceiling decking & painting office drywall to applying wallcovering and painting piping for the refrigeration lines—and in short time Alpine proved to be the contractor of choice.  From the projected one-time $40,000 paint job, Alpine worked on the project approximately seven months and completed several hundred thousand dollars’ worth of work.

Expectations were laid early in both sides, in part though contract language. Scaturro negotiated to require incorporation of the PDCA standards in the contract, noting that omitting this protection was a deal breaker.

PDCA P1 standard was put to good use on this project.    Given the proximity of multiple other trades working in close proximity to the newly painted areas, finished walls were being damaged on a regular basis.  Alpine used signage and emailed documentation that rooms/substrates were completed and work was being inspected and approved by the construction manager’s personnel.   Therefore, when Alpine was asked to come back and repaint walls it was easy to reference the P1 standard and justify how this was additional work that came with an extra charge

The close working quarters among other tradespeople drove the setup and material choices in many instances. For example, when spraying the ceiling deck the Alpine crew had to create small containment areas so that spraying would not interfere with the work of other subcontractors in the building. This also drove the decision to use low-VOC, low-odor products throughout the interior. The company worked closely with Sherwin-Williams to make sure their project needs could be met by these more occupant-friendly products. And because crews were working in comparatively small containment spaces, painters used face respirators with face shields that protected them from dense overspray.

Safety was a significant consideration for both client and the painting crew, and fall protection was an essential element of the Alpine safety plan. The facility was 30 feet tall, and an atrium lift was necessary to reach some interior areas. The lift could reach 65 feet in height and still fit through a standard door, a necessity for this job’s rapid finishing needs. Team members working on the lift wore harnesses and tied off with lanyards.

There was also an aggressive fall protection system established for the painting of rooftop refrigeration lines. Painters were all tied off within six feet of the roof’s edge, while flags around the roof perimeter kept the team aware of their surroundings. For Alpine, this approach was standard protocol and that knowhow was one reason the company proved attractive to the client.

The Alpine crew also wore gear aimed at protecting the cleanliness of this FDA-approved facility. In the later days of the project, painters wore Tyvek suits, booties and hair (and beard) nets any time they performed work in the large refrigeration rooms to maintain its hygienic cleanliness.

Over months of overtime and long hours put in at the near clean-room facility cramped with countless other contractors, Alpine made good on its promise of excellence.

“We did everything in our power to accommodate the client and ensure that we were able to meet the schedule so that Blue Apron could open on time,” Scaturro says. And despite the evolving scope and work done on an ever-changing range of substrates, everything went smoothly.

In fact, the massive time-sensitive, detail oriented project set the standard for the team’s performance—and is the reason that Stellar Management has reached out to work with the painting contractor on future projects." 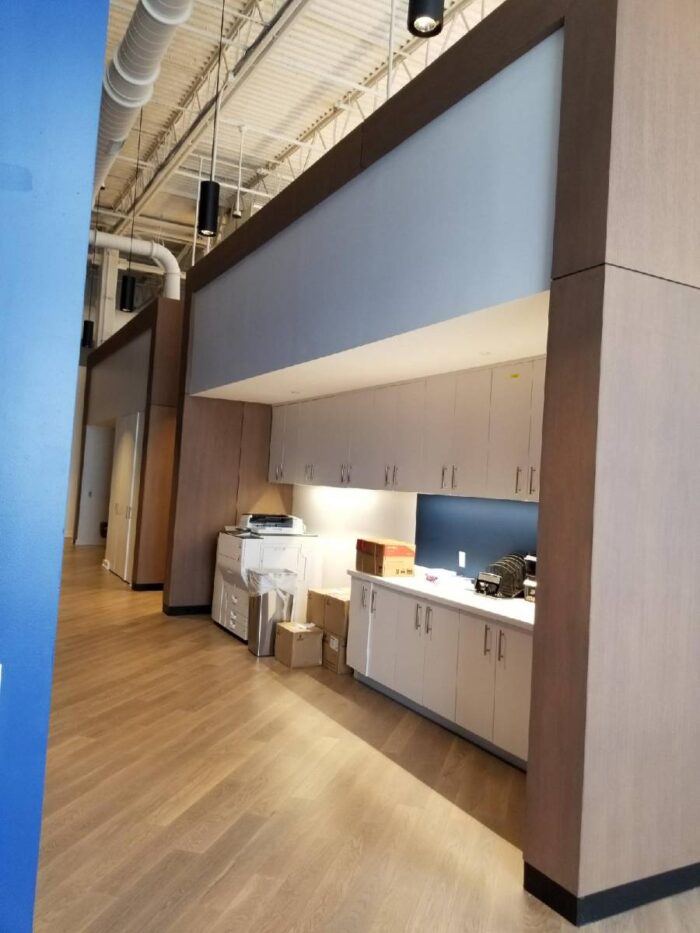 Get Started
More Testimonials >
“His team was well managed, friendly, and efficient and did a great job performing the services requested. We have had the units painted before by other companies and Alpine exceeded our expectations....”
Kurt Reisinger, Board President
High Mountain Village

“They did a great job and hope to have Alpine back next year to finish....”
Mr. Pete Matacchiera, Facilities Manager
Pearson Education

“Sherwin Williams is Proud to be associated with your company. It is very evident of why Alpine is a leader in the industry and why you are so sucessful during these turbulent times....”
Pete Ippolito, President & General Manager Mid Western Division Paint Stores Group
Sherwin Williams

“We recognize that this would not have happened without the pristine expertise of Alpine Painting and Sandblasting. Thank you to everyone at Alpine Painting and Sandblasting Contractors for taking great care of the only National Historic Landmark in baseball....”
Brent Leggs, Senior Field Officer & Monica Rhodes, Manager of Volunteer Outreach
National Trust for Historic Preservation

“Just Wanted to take a minute to thank both Ed and yourself for a job well done. Please also advise your foreman Ruben and Luis that we really appreciate their dedication and attitude to accomplish our three painting projects. Look...”
Kurt Versen
Kurt Versen
#}